Though he was born in Austria (on the 27th of July, 1768) and spent most of his adult life in Rome, Joseph Anton Koch remained to history as one of the leading German romantic painters of the early 19th century. Romantic painting at the time followed two currents, one in Germany with its leading representative Caspar David Friedrich. The other one in Rome under Joseph Anton Koch, with its still classical, but poetic art, inspired by the luminosity and softness of middle-Italian landscapes. 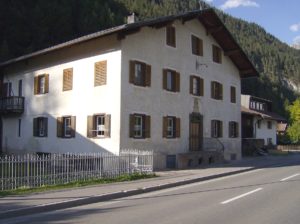 Joseph Anton Koch grew up in the Valley of the Lech in Tirol, in a village called Obergiblen. His parents ran a small farm. It became part of his chores to take care of the sheep and take them to pasture in the valley. His talent, coupled by the close contact he had to nature, soon came to the open and he began to draw with simple charcoal. Obergiblen belonged politically to Austria but religiously to the church of Augsburg. The bishop of Augsburg, travelling the country side to administer communions, noticed his talent and recommended he go to art school, to the dismay of his mother who was planning a priest’s education for her son (of her offspring of 11 children only he and two sisters attained adult age).

After a short apprenticeship in Augsburg he started studying at the Hohe Carlsschule in Stuttgart in 1785. He spent seven years of hard studies there. Unfortunately, his passion for the arts was bitterly spoiled by the rigid discipline and antiquated patterns of learning of the famous Carlsschule. His spirit, rebellious by nature, was inflamed by the ideas of the French revolution and he finally ran away from the school in 1791, as others (such as Schiller) had done before him.

1792 to 1794 he spent nearly three years travelling the Swiss Alps and produced a rich collection of drawings and watercolours, in particular of the Berner Alps and the Swiss Jura. He came into contact with waterfalls, in particular the Rheinfall and the Schmadribachfall. This last topic later became one of his most outstanding achievements when he used his early drawings as an inspiration to create wonderful oil paintings around 1810.

Finally, with a scholarship endowed by the English patron Philip Nott, he travelled to Italy in 1795. There he came into contact with Italian art and architecture and was particularly impressed by the masters of the Renaissance (Michelangelo). He was so enthusiastic by the paintings exhibited at the Uffizi in Florence and expressed his joy about them in such an exuberant manner, that he was denied access to the gallery for as long as two months! After seeing Salerno and Naples he finally settled down in Rom.

Soon developing a close friendship with the painter Asmus Jakob Carstens, and sharing an atelier with him, he became the leading figure of the society of German painters in Rom, the Deutschrömer. In the following years he developed mainly historical or poetic landscapes, also inspired by Carstens’ drawings on Ossian and Dante. In this period he also started studying the representation of the human body and the nude, notably under Johann Christian Reinhart who would soon become his friend. 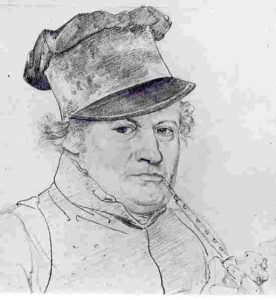 In 1798, when Napoleon occupied Italy and ousted the Pope, the climate in Rome became more rigid, bureaucratic and less conductive to creative achievement. Koch changed his views on the French revolution and started holding the French in contempt. His renewed rebellion against the status quo of course had to do with his views on individual freedom and on the free expression of the arts. The environment for the artists in Rome had become less fruitful and exciting. Nevertheless, and despite the early death of his close friend and colleague Carstens in 1798, he staid in Rome. Among other things he passionately set his mind into illustrating Dante’ s Divina Commedia and completed 30 drawings by 1802, that earned him a solid reputation as one of the leading Dante illustrators ever. At that time he shared an apartment with the great Danish sculptor Thorvaldsen at the Via Sistina.

In 1803-1804 he travelled with his good friend Gottlieb Schick of Stuttgart along the country side and hills surrounding Rome (monti Sabini and Valle dell’ Aniene) and fell in love with Olevano Romano, an idyllic village that would become an endless source of inspiration for him and his colleagues. In these early trips through the roman countryside he also shared the company of the older painter Reinhart, whose skills deeply impressed him. In Olevano Romano he married the daughter of a winegrower and spent most of his summers there until the end of his life.

Around that time he finally started dedicating himself to the art he is best known for: The oil-paintings of landscapes, heroic landscapes by his own definition. 1805 he created his first masterpiece as a landscape painter: “Heroic landscape with rainbow”. His speciality: The creation of landscapes on classical frameworks, with great perspective, from the close representation of human beings and animals while doing their daily chores, through woods and forests, through distant villages, all the way to far away mountains or hill tops. Yet no aspect of his paintings is unfocussed, the eye gets drawn to all different levels with equal intensity. As a viewer you are tempted to stop for a moment and browse through the painting in order not to miss on any point of importance, while at the same time enjoying the poetry, yes, the magic, of the composition as a whole. Indeed, Koch himself described his art as being classical in nature, a precise account to the landscape, but adding the poetry and the romanticism through the scenes taking place at the front or on the sides of the paintings, of simple people just going about the daily life.

In 1810, a group of painters called the “Lukasbrüder” arrived to Rome from Vienna and chose Koch as their teacher. There were talented young artists such as Friedrich Overbeck, Franz Pforr, and Ludwig Vogel, who had separated themselves from the Academy. They were a deeply religious group and lived in the Convent of S. Isidoro. Although some leading German painters in Rom ( such as Peter Cornelius and Wilhelm Schadow), joined them, Koch never really did. Koch saw himself as a „Deutschrömer”. In fact, he and Reinhard sometimes made funny remarks about the overly religious colleagues and Reinhart jokingly called them the „Nazarens“ (I Nazareni”), name which remained until today to describe their group (there will be more on the topic of these groups in our homepage soon).

Koch continued his work, guided by inspiration but also by the necessity of earning money. He tried a series of 20 prints on Rome in 1810 (The “Römische Ansichten”). Due to the limited commercial success he did not further pursue that direction.

A stay of three years in Vienna (1812) exposed him to the new currents of romanticism in Germany. Though he was impressed by the sudden freedom allowed to artists, changing the paradigms of landscape representation completely, he remained true to himself and to his heroic landscape. Thus the romantic schools in Germany and Italy developed themselves separately, as they also had little contact with one another (German romantic painters such as Caspar David Friedrich never visited Italy). In Vienna with his wife and their daughter he worked relentlessly but suffered of the climate and the rigid spirit of the city. In 1815 he returned to Rome, where he stayed for the rest of his life.

After the return of the Pope Pius VIII in Rome the atmosphere became more free and more conducive to lucrative work for the roman painters. The life of the Deutsch-Römer centered at the Caffè Greco, where Koch had received his mail for years. Some interesting drawings and paintings revolving around the last part of Koch’s life by Genelli, Führich, Hieronymus Heß (among others) show the jovial and creative mood of that period in Rome. The frequent visits of the Prince and then King of Bavaria, Ludwig I and his deep appreciation of the work of the German romantic painters in Rome gave them new means of support, including the purchase of the villa Malta, where the painters could work at their leisure. He brought back with him many paintings of Koch to Bavaria, where they are still exposed today in the Neue Pinakothek. 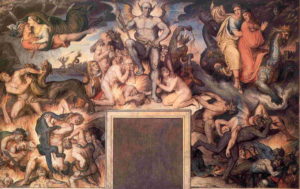 Fresco in the Casino Massimo in Rome

In 1825 he developed vivid interest for a new technique, the fresco painting. Due to his reputation as an illustrator of Dante, he was commissioned by the marchese Massimo to decorate a room of his Villa (Casino Massimo) with scenes of Hell and Purgatory of Dantes’ “Divina Commedia”. Of his work he writes that he left Rome a “monument of his imagination”. In fact, he left Rome much more than that. Unlike many of his colleagues of the time, Koch permanently settled down in Rome and was the founder of a large Italian family. Romans take pride in him as of a real Roman. One of his grandsons was the renowned architect of the end of the XIX century, Gaetano Koch (1849-1810), who built such wonderful things such as the Piazza Esedra, the US-Embassy in the Via Veneto and the Banca d’ Italia, just to name a few.

Joseph Anton Koch died on the 12th of January, 1839 and was buried in the teutonic cimitery under the shade of St. Peter’s dome. 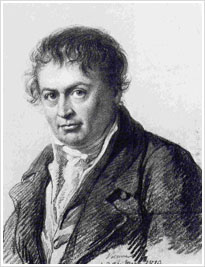